With 4 companies reaching $1 trillion in market cap, one company reaching $2 trillion, business leader companies in 104 industries, 70 out of 100 most influential companies during Pandemic (2020-2021) listed by Time magazine, and most successful national development plans adopted by 24 countries, Blue Ocean Strategy has turned out to be the world's greatest business and management model ever.

Blue ocean strategy is the simultaneous pursuit of differentiation and low cost to open up a new market space and create new demand. It is about creating and capturing uncontested market space, thereby making the competition irrelevant. It is based on the view that market boundaries and industry structure are not a given and can be reconstructed by the actions and beliefs of industry players.

Red oceans are all the industries in existence today - the known market space. In red oceans, industry boundaries are defined and accepted, and the competitive rules of the game are known. Here, companies try to outperform their rivals to grab a greater share of existing demand. As the market space gets crowded, profits and growth are reduced. Products become commodities, leading to cutthroat or 'bloody' competition. Hence the term red oceans.

Blue oceans, in contrast, denote all the industries not in existence today - the unknown market space, untainted by competition. In blue oceans, demand is created rather than fought over. There is ample opportunity for growth that is both profitable and rapid. In blue oceans, competition is irrelevant because the rules of the game are waiting to be set. A blue ocean is an analogy to describe the wider, deeper potential to be found in unexplored market space. A blue ocean is vast, deep, and powerful in terms of profitable growth. 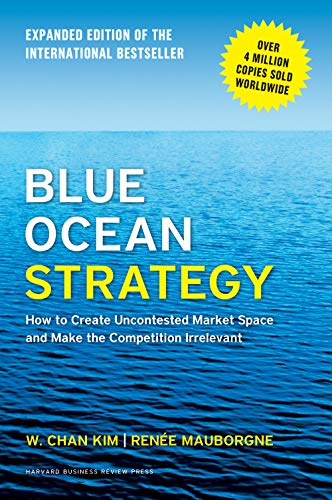 Blue Ocean Strategy (the book sold 4 million copies and translated in 46 languages) remains the most global game-changing concept since its inception in 2005. The founders of the concept are Dr. W. Chan Kim and Dr. Renee Mauborgne, both jointly top with No. 1 position on Thinkers50, the ranking of most influential business thought leaders of the world, named as "Oscars of the Management" by Financial Times. Dr. Kim is advisor to European Union and Dr. Mauborgne remained advisor to former US president Barack Obama for his 2 presidential terms, and both are fellows of World Economic Forum.