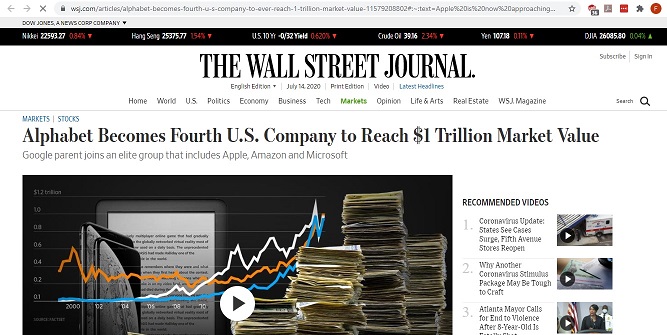 Alphabet Inc. is an American multinational conglomerate headquartered in Mountain View, California. It was created through a restructuring of Google on October 2, 2015, and became the parent company of Google and several former Google subsidiaries. The two founders of Google assumed executive roles in the new company, with Larry Page serving as CEO and Sergey Brin as president. Alphabet is the world's fourth-largest technology company by revenue and one of the world's most valuable companies. On 16 January, 2020, Alphabet Inc. reached the market cap of $ 1 trillion. In addition to the creation of holding company and restructuring, Alphabet's historic success lies in a series of blue ocean's created within Google. AdWords, AdSense, Youtube, Gmail, Google Maps have been the blue oceans which put Google on path of one of the most glorious successes in corporate history.

Simply put, Blue Ocean Strategy refers to competing in an uncontested market space (in contrast to red ocean that is bloodied by fighting competitors). This gives the adopter an advantage in terms of profit and growth for a time period limited only by the resources and capabilities of its copying competitors, if any at all.

By observing Google closely, one will find its mastery over the formulation and implementation of Blue Ocean Strategy. Starting from its search engine to latest projects of driver-less cars and hiking trail mapping, it is putting it steps in paths that no one trod before. We all know its superb search engine that is hard to beat. We also know about its driver-less cars (click here). Most of you are probably aware of Google Maps. The latest one that would be hard to beat is the unfolding map of wilds and trails- for hiking, biking, running, 360 touring of historical places - what not?

They already have developed a set of 40lb equipment called "trekker" that would be backpacked by Google people to have 360-views of hiking and biking trails around the world. These shots would be transformed into a series of continuous pictures resulting in a virtual complete view for hikers, bikers and tourists to see online. There is no surprise that, starting its "Street View" feature in 2007 covering about five cities in USA only, it now stands at 3000+ cities in 43 countries as of 2012!

It seems like Google has mastered the Blue Ocean Strategy. We will be waiting to see the next surprise from Google. What do you think it would look like?

Founders Larry Page and Sergey Brin named the search engine they built "Google," a play on the word "googol," the mathematical term for a 1 followed by 100 zeros. The name reflects the immense volume of information that exists, and the scope of Google's mission: to organize the world's information and make it universally accessible and useful. If Microsoft (NASDAQ: MSFT) had optimized expenses in the quarter ended June 30, 2008 the company would have earned $6.3 billion. Its actual earnings were $4.0 billion. Management threw $2.3 billion down the drain by over spending on everything in its competition with Google (NYSE: GOOG). That's because Microsoft may have been born in a blue ocean, but now the company is living in a red one. According to the latest Interbrand report published in Business Week, Microsoft is the second most valuable brand on the planet. Google, incorporated in 1998, is number 20 on the list. Both of these companies were born in a "blue ocean" of their own creation. But today Microsoft, at 32 years old, already is long in the tooth for an IT company. Management now must survive in a sea of "Red Ocean" expenses. Hounded on all sides by Google as well as newer upstarts.

Google founders Larry Page and Sergey Brin met in 1995. By 1998 these top two students in their class at Stanford had bought a terabyte of storage at discount prices and built their first data centre in a dorm room. Come December of the same year, they moved operations into a garage and were answering 10,000 search queries per day. There was no turning back after that and by June 2000 they had the largest search index while handling 100 million queries per day.

Eliminated
Google eliminated configuration options for regular users. Google eliminated the search configuration paradigm, removing the need for users to preselect the Boolean filters AND/OR/NOT (dropdown menus and radio buttons). Simplicity of
search interface was a raging battle at search engine companies for years until Google cleared the noise. However, many website search interfaces are obsessed with letting user's fail with Boolean filtering.

Reduced
Google have dramatically reduced the clutter: both the visual clutter of other "portals" and the not-so-valuable stuff it represents. Google Wave, a new "conversation" type service that Google is hoping to reinvent e-mail, IM and group conversations - with the help of developers at the event. The product won't be released to the public until later this year but it's more than just a product. The company is calling it an open source platform that developers can build on, just as they did for products like Google Maps. It starts off like an email between two people but quickly becomes more. It allows users to post "replies" to parts of the email - for example, the questions at the top of the sender's message about weekend adventures and again further down to confirm next week's meeting location. In normal e-mail messages, it would take a dozen or more back and forth emails between the two people - and exponentially more messages as other people get added to the conversation - to have the same conversations.

One cool feature the company showed off was the ability to "playback" the message - to show how it evolved - for people who were added to the conversation late. The service also incorporates well with other sites, such as blogging services and photo albums and includes some robotic-like features, such as adding a bot user called Bloggee, which takes the conversation or the images attached (with a cool drag and drop feature) and populate a blog post with it. It even becomes, via extensions, a third-party Twitter app.

Raised
Google have dramatically raised ease of use. Simplicity fuels many elements of good design, including ease of use, speed, visual appeal, and accessibility. But simplicity starts with the design of a product's fundamental functions.

Google doesn't set out to create feature-rich products; the best designs include only the features that people need to accomplish their goals. Ideally, even products that require large feature sets and complex visual designs appear to be simple as well as powerful. Google teams think twice before sacrificing simplicity in pursuit of a less important feature. The hope is to evolve products in new directions instead of just adding more features. Good design can go a long way to earn the trust of the people who use Google products. Establishing Google's reliability starts with the basics - for example, making sure the interface is efficient and professional, actions are easily reversed, ads are clearly identified, terminology is consistent, and users are never unhappily surprised. A greater challenge is to make sure that Google demonstrates respect for users' right to control their own data. Google is transparent about how it uses information and how that information is shared with others (if at all), so that users can make informed choices. The products warn users about such dangers as insecure connections, actions that may make users vulnerable to spam, or the possibility that data shared outside Google may be stored elsewhere. The larger Google becomes, the more essential it is to live up to the "Don't be evil" motto.

Created
Google created Page Rank: the magic algorithm that seems to read your mind and return relevant results. Google's Page Rank algorithm assesses the importance of web pages without human evaluation of the content. In fact, Google feels that the value of its service is largely in its ability to provide unbiased results to search queries; Google claims, "the heart of our software is Page Rank." It's no secret anymore that Google ranks as the number one defacto-standard in the field of major search engines. Today, Google accounts for more than 85 percent of all Internet searches on a daily basis.

The Google Directory Page Rank is an 8-unit measurement. These values can be viewed in the Google Directory. The Google Page Rank value relies on the uniquely democratic nature of the Internet by using its vast global link structure as a prime indicator of an individual page's value. In essence, Google interprets a link from page A to page B as a vote, by page A, for page B. But, Google looks at more than the sheer volume of votes, or links a page receives. It also analyzes the page that casts the vote. Votes cast by pages that are themselves important or are favorably viewed as "established firms" in the Web community weigh more heavily and help to make other pages look established too. A Google search is an easy, honest and objective way to find high-quality websites with information relevant to users searching specific products, services or information on a particular subject. The following diagram shows overview of Google search engine in blue ocean dashboard. Google is shown as in the blue ocean dashboard in Figure #5. This dashboard was created by Dr. Rod King, who claims that it can comprehensively manage the performance of any business model. The Figure #4 shows the general information in the Dashboard. 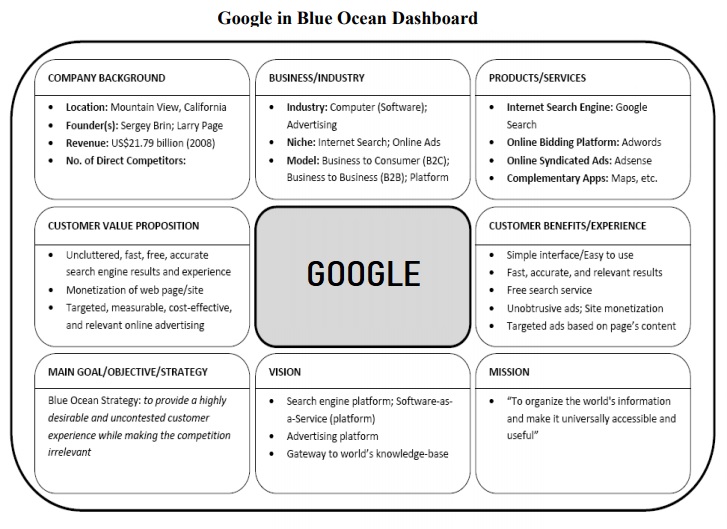 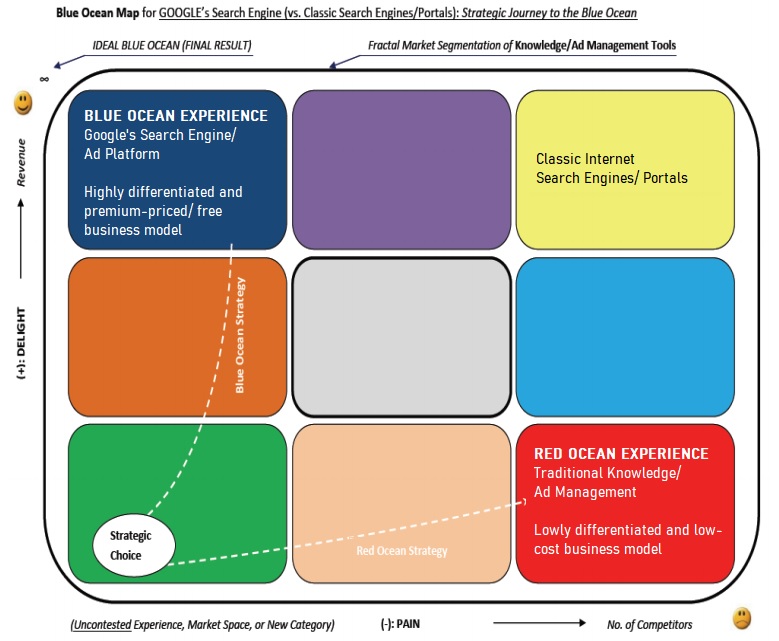